Conceived as a kind of evolving, spiralling cine-myriorama, Made In Dublin is an ever-changing, nine-screen work about a city on the move, cinematically constructed as infinitely unravelling parallel sequences of events played out by the movement of people caught up in time and place. And that place is Dublin.

With shifting narratives built around the collaborative work of Eamonn Doyle and Niall Sweeney, featuring a quadrophonic composition by David Donohoe that incorporates the voice of Kevin Barry, Made In Dublin is a choreography of the city itself; its fabric, body, population and psyche; their combined forces continuously shaping and wearing away at the autonomy of the other. Fragmented, labyrinthine, braced against the light, Made In Dublin reveals a city whose concrete is as plastic as the movement of its inhabitants. 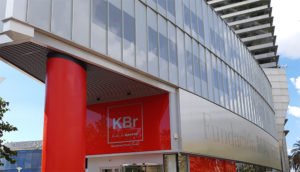