This self-referential film captures the artist’s own sense of alienation in a context hostile to him. Izumi creates a self-portrait with steady camera shots of his entire body, which follow one another showing him to be passive and isolated in different scenes of a western urban landscape. Disguised as a fox, he repeats his actions devoid of all emotion to eloquently manifest how he does not belong to that environment, and that any effort he makes to adapt is useless.

The fox —kitsune in Japanese— is an important animal in the Asian mythological tradition: it is an intelligent protector; it is capable of adopting human form so as to make fun of the people it comes across. Taro Izumi transforms into a fox, yet he suggests an inverse reading of the ancestral myth. He personifies the animal, but as a being incapable of understanding the world around him, from within a nature that has been taken away from him, and into which he no longer fits because he has no purpose whatsoever within it. The scenes are deliberately ridiculous, triggering an absurd situation, a regular resource in the works of the Japanese artist.

Absurdism could be defined by the lack of a specific purpose for human existence and the intensification of indifference, like that of someone who has accepted defeat. Izumi conveys his burden to us through the construction of a character who, imprisoned in himself, wanders tirelessly through the city, detached of every desire, commodity, or ambition. However, he also conveys weight to us when he puts the spectator’s patience to the test with his prolonged actions that repeat themselves again and again, impressing upon us the sadness of a character who goes unnoticed until becoming just one more element of an alienated landscape.

The sound also contributes to the monotony of the film. Through the simple play of opposites (silence-noise, positive-negative) he displaces the unintelligible murmur of the city to the cry or the whimper of the animal. In this way, the concise content makes use of film’s very own resources—time and sound—to reinforce the intention behind the image. Our perception, in a reading of all the elements articulated by the artist, meets face to face and repeatedly with a situation in which cultural difference isolates the character, a reflection of the contemporary socio-economic framework and its frictions. 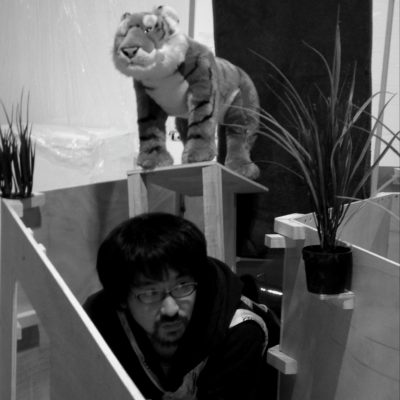 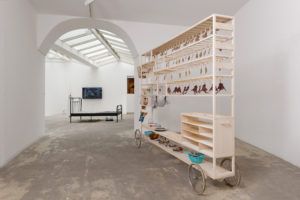