I work in a variety of mediums but I am perhaps best known for my film and video installation works. My ideas and questions are always at the center of my practice and the appropriate medium follows, be it moving images, photography, sculpture or drawing.
My point of departure as a filmmaker is loosely based in portraiture and documentary. The nature of people’s life, work, talents and ideas and those individuals whose actions or demeanor can in some way reflect on the human condition serve as my inspiration. My films lie somewhere between the realms of portrait, performance, and documentary. These areas are subtly woven together in strictly directed, symbolically charged films of individuals engaging in their own specialist act. Through simple materials and playful human performances, my work attempts at bringing the mind-blowing endlessness of time and space down to an earthly scale.

I am interested in people’s drive to carry on and get out of bed every morning. I admire the enthusiasts, the people who try again and again, often banging their head against the wall; the different ways in which people find purpose, be it through sausage eating, weight lifting, singing or acting as corpses, or through mapping the universe. I sympathise with stuttering, stumbling and singing out of tune and I am fascinated by the weird and the beautiful, the vast and strange variety of human endeavours. By focusing on the specific and the intimate, I try to illuminate the large and the universal.
I see myself as an active director rather than a documentary-maker in my approach, making people perform their specialty, sometimes live in front of an audience, in particular settings and ways, exploring the relationship between live performance and documentary.
I make films that portray individuals, often alone, sometimes determined and driven, but always trying.’ 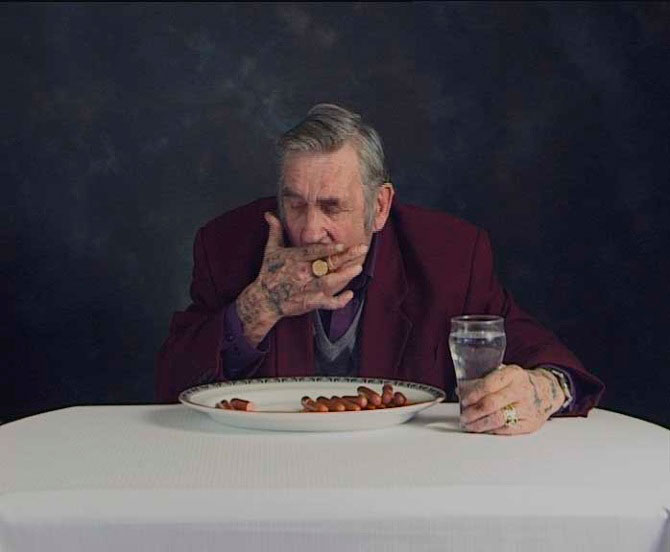