Rafaël Rozendaal is a visual artist who uses the Internet as a canvas, having created websites that attract over 40 million unique visits per year. His artistic practice also includes installations, lenticular paintings, textiles, lectures and haiku. He has had recent solo exhibitions at Steve Turner, Los Angeles, 2012, 2014, and 2016; TSCA Gallery, Tokyo, 2010 and 2016; Postmasters Gallery, New York, 2013 and 2015; Upstream Gallery, Amsterdam, 2014; and MU, Eindhoven, 2015. His works were presented on video walls in Times Square, New York, 2015; and have been included in the Internet Pavilion at the Venice Biennial, 2009, and the Valencia Biennial, 2005. He also participated in Ways Beyond the Internet at the DLD Conference in Munich, 2012, curated by Hans Ulrich Obrist. He lives and works everywhere. 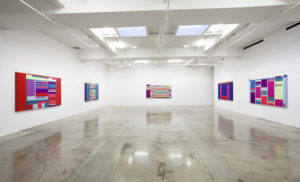