On The Other Side

A locked door separates a “him” from an invisible and unresponsive “her”, who is presumably hiding somewhere in her boudoir. He tries to enter, increasingly shifting his behaviour from soft negotiation to verbal threat and physical manifestations of anger. The tension builds up as he bangs on the door, making the atmosphere more and more ominous, yet still evoking no response. The distance between the two lovers is endless and communication impossible. The absurd shifts between conceivable threat and desperation create a relationship, which links desire to power as the woman is torn between her painful emotional reactions and the longing for connection. The installation is set as a contrast of physical positions, and it creates a staged scenario for viewers to encounter the disconnection each character faces. There is a distinctly disembodied aspect to the film. As viewers, we are able to see that the two shadows will never be able to fully communicate, and their clouded pleading is met by an empty space they will never be able to access or see. The film’s rationale becomes heightened by these distinctions of separation and looped convolution, especially as it affects one’s inability to intervene or power to act. On The Other Side continues Constantinescu’s series of short films reflecting on dualisms experienced within intimate relationships. The work is a sequel to the film Prologue. 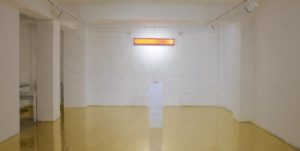