As part of the exhibition Catalunya, terra cooperativa [“Catalunya, Land of Cooperation”], the artist Domènec shows his piece Voyage en Icarie, a video recording of an action that happened in front of the statue of Narcís Monturiol during the Festival Ingràvid, in Figueres. This project remembers the socialist and Icarian commitment of Monturiol by referencing the title of Etienne Cabet’s novel, which gives name to this Utopian and cooperative movement. The Icarian influence in Catalonia was very intense throughout the 19th century, and some of its members participated in the migration movements to start egalitarian communes in the United States. The cooperative movement in Catalonia was highly influenced by the Icarians through Monturiol, who founded, among others, La Fraternidad, Spain’s first socialist magazine, where a translation of Cabet’s novel was published. 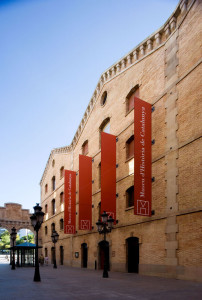