All the beauty in the world

Walls, borders, the right of asylum and nationality are fundamental issues to decode the global world we live in. The audiovisual projects in this exhibition use footage images, documentary films, performance or fictionalised reality to tackle key concepts such as democracy, universal citizenship and the global economy of bodies.

The Wall, shows a montage of film sequences in which people overcome -or try to overcome-borders: from the eary escape attempts along the “antifascist bulwark” to pictures taken on November 9, 1989 to attempts at crossing the borders between Mexico and the United States, Africa and Europe, or along the Gaza Strip. All scenes are shown in slow motion. Moving to the forefront there is the enormous physical strain that surmounting borders demands: the “naked body” who is risking everything, revolting againts the dispositive of inclusion and exclusión. That the world has become flat, as Tomas L Friedman asserted in his 2005 book in which globalization is analysed, here proves to be pure cynicism, or a purely rhetorical construction.

In their third collaborative film Zanny Begg (Sydney) and Oliver Ressler (Vienna) focus on struggles to obtain citizenship, while at the same time questioning the implicitly exclusionary nature of the concept. This work is partially constructed through a series of interviews with Ariella Azoulay, Antonio Negri and Sandro Mezzadra. These interviews form the starting point for a discussion in Barcelona, one of Europe’s most densely populated and multicultural cities, with a group of people living “without papers”.

The film is set at night, against a city skyline, providing a dark void from which those marginalized and excluded can articulate their own relationship to the arbitrary nature of national identity and citizenship. Spain was chosen for this project as it is teetering on the brink of financial meltdown and is testing the limits of European cohesion. The title, The Right of Passage, refers to the stages, or “rites of passage” that mark important transitions on the path to selfhood. The exchange of “rites” with “rights” suggests that freedom of movement must become a right granted to every person – regardless of his or her place of birth. As the film explores these journeys not only transform those who embark upon them but also the places they inhabit. In the film, the conversations around citizenship are interwoven with animated sequences.

Máquina Hamlet_Europa (Collective re-writing of performances) is a work in-progress that comprises film essay, live cinema, performative practices, poetic readings, conferences and the collection of materials. The work proposal started from the March of Dignity to the El Tarajal beach (Ceuta, 2016). There, on February 6, 2014, the Guardia Civil fired rubber balls at those who were trying to swim into Europe, resulting in the murder of 15 Sub-Saharan people. On the basis of this event, I made a critical analysis of the European migration policy, including the activism that questions it, in order to reflect on the circumstances that make it possible to blur Europe as a welcoming space. With the collaboration of the poet Antonio Orihuela and the cantaor Javi Triana and the hand of María Zambrano, Heiner Muller, Jorge Riechmann and Franco “Bifo” Berardi I put forward the following idea: Europe is collapsing, and, at the same time, Europe is imposed on us. Two performances are presented here, one made in the Caravan Opening Frontiers to Melilla (2017) and to Italy (2018). Two performatic journeys that cross landscapes and places where we find the remains of fear and deception with which the Fortress of Europe is being built today.

‘Jus sanguinis’ or ‘right of the blood’ refers to the way Spain aligns physical and geographical bodies by giving people citizenship only if they contain Spanish blood. It is also the name of a performance and installation (2016) by Peru-born and Spain-dwelling artist, Daniela Ortiz, who arranged a blood transfusion from a Spanish citizen while being 4-months pregnant. From deep inside her, infused by liquid Spain, her baby transcends national borders and her own body becomes a complex cultural terrain. The use of blood reminds us of the real violence of immigration laws, while the video installation recalls the ease at which mortal harm can flow through media veins. 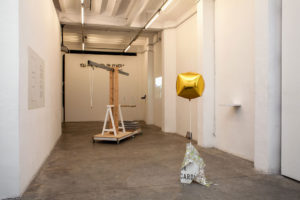