The pure necessity is based on David Claerbout’s idea of returning his original behavior to the animals of The Jungle Book. A way for the Belgian artist to deconstruct the anthropocentric dimension of Disney’s story while offering a reflection on the traditional narrative mechanisms. The work plays with the idea of cause-effect, plot and action, creating a 50-minute film that seems suspended in time, in a kind of contemplative limbo in which the expectations of the viewer are always denied or postponed. Like Claerbout’s other works, The Pure Necessity subverts the classic relationship -established by painting- between the content and the form to criticize the simplifying reduction of the jungle and its inhabitants to setting and sidekicks for its human protagonist.

The landscape is no longer presented as a functional context, full of signs whose meaning is given by human rationality but as an open world in which events overcome the simple subject/object approach, posing an existential openness -of that incapturable- that resonates throughout The bee who forgot the honey, the larger exhibition that includes this installation at Casa Vicens.

Over a period of 3 years, David Claerbout and a team of professional artists painstakingly redrew the frames of the original movie by hand, one by one, and then assembled them to create an entirely new, lifeless animation, which stands in raw contrast to the lively and rythmical original. Now devoid of narrative, the animals move amidst the jungle as if the story were of their own making. 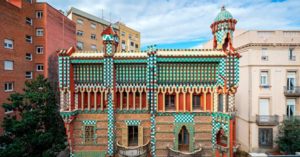