Seth Cluett. From Delivery To Withdrawal

— (into implicit secrecy and silence #3)

In his text Realist Magic, Objects, Ontology, Causality, Philosopher Timothy Morton suggests that rhetoric is “a gravitational field that sucks us from delivery to withdrawal, from the sensual into implicit secrecy and silence.” In this work, I am interested in minor aberrations in space and time caused by corporal movement that might make us aware of the relationship between our bodies and the perceived world. By re-imagining the parts of the Michelson-Morley Interferometer used to detect gravitational waves as a fictional tool to prepare humans to perceive fluctuations in space-time, this work posits a rhetorical counter-point to the scientific proof of the successful LIGO experiments asking if it is possible to eventually hone our senses to identify the gravity wave modulations of our constantly modulating perceptual system. In the work, loudspeakers play sine waves whose wavelengths are derived from the architectural layout of the space while a video shot using mirrored looking devices super-impose shifted visual information from the outside space to the audience. A new particle-saturated reality is derived from the empty space of architectural volume and the displaced images and sound of the technically-mediated physical world, a reality where space might be felt and time may be understood with a heightened acuity worthy of the future revealed by the LIGO’s confirmation of Einstein’s predictions.

6–10 pm. Introduction to the video/sound archive.

10 pm. From delivery to withdrawal (into implicit secrecy and silence #3), a performance by Seth Cluett. 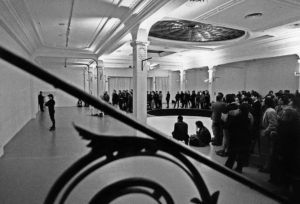