A video selection about music and beyond

Over the centuries, there has been much debate about the meaning of music and composition as linguistic forms. Although it would be difficult to affirm the universality of musical language without falling into hasty generalizations, it can be said that music functions as a communication tool, with its own specific codes of expression and representation, intonation and vocabulary.

As it happens with linguistic variety to distinguish among people who speak the same language (‘dialects’), in the musical field it is also possible to differentiate between different genres or styles. According to the academic classification, the factors to be taken into account in this case would be the ‘instrumentation’, the ‘design’ and the ‘intention’ of a composition, as well as its ‘cultural peculiarities’ and the ‘historical and geographical setting’ of its production.

According to this, you would have genres that use classical or acoustic musical instruments, and others that are produced virtually, with electronic nuances and synthesizers; there are genres that are a mixture of different music, and others that claim their purism. Some follow an exact score and others are based on improvisation. There are compositions designed to accompany singing or dancing, as well as to cause moments of recollection and reflection. There is traditional or popular music, as well as evangelical or religious music. There are rhythms resulting from youth movements in opposition to the system, as well as repeated litanies addressed to a saint or melodies related to the protests of the working class.

As this video selection wants to show, we could say that music is a hybrid, diverse, plural, heterogeneous phenomenon, but present in everyday life or in the memory of each one. That is a communication tool with a strong political, social, liturgical, visionary or entertainment character.

Thus, in Helicon (2018) by Fito Conesa (Cartagena, 1980), we hear a mystical song addressed to the Earth before the Apocalypse; and in Reclamar el eco [Reclaiming The Echo] (2012) by Marco Godoy (Madrid, 1986) the slogans pronounced in the protest demonstrations in Spain. The video Amapola (2017) by Teresa Serrano (Mexico City, 1936) proposes a sad melody that celebrates the symbolic resistance of the poppy flower to the drug trafficking network in Mexico, while Glorias de un futuro olvidado [Glories of a forgotten future] (2016) by Adrián Melis (La Habana, 1985) presents a group of women who remember their past in the time of Capitalist Cuba through some songs. On the other hand, Wonders (2016) by Carles Congost (Olot, Girona, 1970) uses resources close to musical biopic and performance to reflect on the social and personal repercussions of success and failure; and Dancehall Weather (2017) by Cecilia Bengolea (Buenos Aires, 1979) proposes a mix of various choreographic videos filmed between 2014 and today, where dancehall music constitutes an important moment of affirmation and aggregation.

We could reaffirm, then, that the meaning (or interpretation) attributed to music has to do, essentially, with the cultural horizon from which it is produced or heard, but that its existence is verified from one side of the planet to the other. As a resonance, a repercussion, or a continuous reflection. An infinite echo beyond time and space. 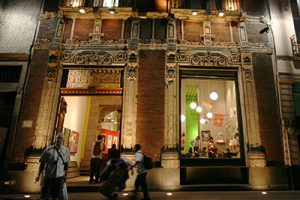