Marina Vinyes Albes holds a degree in Humanities from the Pompeu Fabra University in Barcelona, where she also specialised in Contemporary Film and Audiovisual Studies. Later she studied Design of Cultural Projects at the Sorbonne Nouvelle-Paris 3, thus developing her professional life between Catalonia and France. Since February 2020, she is Head of programming, educational services and exhibitions at the Filmoteca de Catalunya in Barcelona. In Paris, she has been a professor at the Faculté des Lettres of the Sorbonne University, where she is preparing her PhD thesis, and has worked in the artistic projects department of the Jeu de Paume, where she has curated numerous film cycles between 2013 and 2018 and the video installations’ exhibition Omer Fast. Le present continue (2015). In Barcelona, she has collaborated with the EUROM (The European Observatory on Memories), the CCCB, the Open City Thinking Biennale, the ICUB, the Maresme Biennial of Contemporary Art and the ‘la Caixa’ Foundation in the organisation of seminars, film programmes and cultural activities. In 2013 she received the Walter Benjamin Memorial International Prize for her unpublished essay Usos i abusos de la imatge en l’univers audiovisual de la Shoah (Uses and Abuses of the Image in the Audiovisual Universe of the Shoah, Documenta Universitària, 2015). 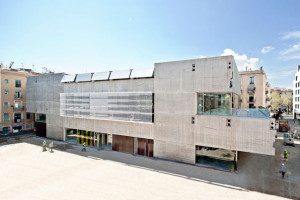