Tuesday brings, through superimposition effects, a set of unpublished dialogues between two excerpts from the same film fragment of Stanley Kubrick’s The Shining. It is composed of 237 variations in reference to the room number that catches the attention of Dany (Dany Lloyd), the son of Jack Torrance (Jack Nicholson), and precipitate the new appear of the murdered twins into the film.

With variable durations ranging from a few seconds to several minutes, each of the 237 fragments is based on an ever-changing setting of two confronted excerpts. The visual and sonic articulation, renewed for nearly four hours as the film unfolds, constitutes Tuesday’s main aesthetic concept. 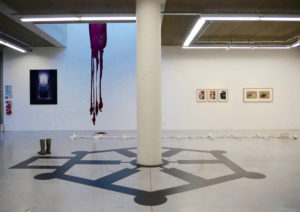