The vertically split-screen video is composed of a series of flickering black and white photos on the left hand side, each shot seemingly following a man dressed in black, and locked-down moving shots of city-scape on the right hand side. There are two voices; a male speaking in German to accompany the left hand side images with continuous sounds of quick footsteps, and a female voice narrating the right hand side images in English, with the sound of traffic, people passing by or quiet sound of flowing water of a river in the background. It is difficult to discern what is going on in the two sets of images, even if a viewer understands one or both of the languages spoken, but one might vaguely understand that ‘he’ is followed by ‘her’.

The work’s enigmatic quality of a ‘detective-story like’ setup is further enhanced by the narratives, poetic when audible, but often incomprehensible as the two voices overlap. The male voice speaks in a crisp pace, in tune with the flickering speed of the monochrome image, and with the footsteps supposedly of the man being followed. In sharp contrast, the female narrative is soft spoken, reserved, as if lost in thoughts, to match the non-eventful and placid image of the right hand side. Contrast, or dichotomy is also an underlining theme for the work; language, gender, monochrome versus colour, or dynamism versus immobility, all of which contribute to the complexity of the work. 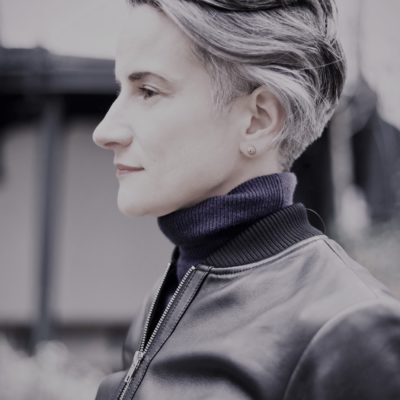