“Inspired by the particular relationship between subculture and political movement in 1990s Taiwan. In 1995, there was a human-shape balloon on the top of Chongxing Bridge in Taipei, and there was also the attempt of suspending all kinds of items in the air, such as washing machine, boiling hot pot, the statue of Chiang Kai-shek, and sex doll, trying to crash them to the ground. But the plan failed eventually; nothing was destroyed. Before everything started, it ended because of the self-explosion of the human-shape balloon. The same year under Chongxing Bridge, there was also a large scale fight. The people present there that day slashing each other with iron rod or sashimi knife. When we found the people involved, however, they told us it was actually a fight between political factions.

Re-rupture assembles two seemingly unrelated historical fragments: People’s Taxi riot and Taipei Breaking Sky. I invited five drivers who participated in the fight at the time to return to the event site, while hanging a guitarist Li Na-shao on the top of Chongxing Bridge to play music.

This work is a cooperation with my long-time collaborator, screenwriter Chen Wan-Yin.” 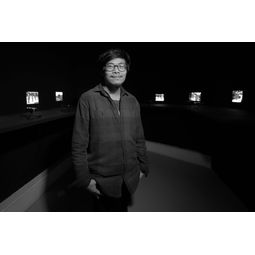