Staging Silence (3) is the third and final instalment in a series of autonomous art films by Hans Op de Beeck, all of which have been directed according to the same principles. Two pairs of anonymous hands construct and deconstruct fictional interiors and landscapes on a mini film set of just three square meters in size. These anonymous hands, like a double Deus ex Machina of sorts, decide on the life and death, growth and blossoming or decay of the places that are conjured up.

It is a reflexion on how landscape, and nature in general, has been seen as a metaphysical object by mankind, a world-at-hand (Vorhandenheit) as Heidegger calls it, and the way in which man ‘humanises’ open space in an attempt to create meaning, identity and control. Intimate surroundings become open landscapes in a visual journey through depopulated, enigmatic and often melancholic territories, which are built up and taken down before the eye of the camera. This theatre of landscape acquires its full meaning against the backdrop of the magnificent stage of the Reial Cercle Artístic, in a sort of ironic and beautiful mise en abyme.

The installation is part of the exhibition The bee who forgot the honey. 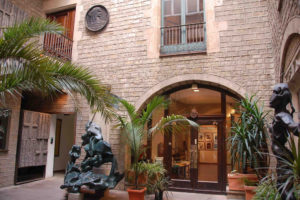 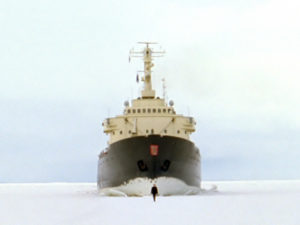